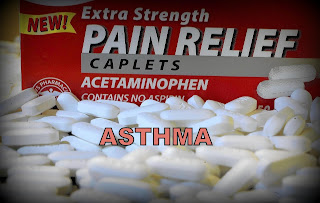 Acetaminophen is the drug of choice for fever in young children. Pediatricians, parents, and caregivers consider it to be safe for most children when it is administered in accordance with the manufacturer’s directions for use.

In 2000, however, concern was raised about the safety of acetaminophen as a result of the findings of a case-control study by Shaheen et al. that suggested that frequent use of acetaminophen (also known as paracetamol in the United Kingdom) among adults was associated with asthma, and among those who already had asthma, with more severe disease.

The mechanism for this association was thought to be the depletion of glutathione in the lung, leading to greater oxidative stress. This concern led to more than a decade of observational research on acetaminophen use and asthma in adults, as well as in children and in pregnant women.

The limitation of observational studies in assessing the risk associated with these common over-the-counter medications is confounding by indication.

In the case of studies evaluating an association between acetaminophen use and asthma in children, viral respiratory illnesses are the most common causes of wheezing among children with asthma, but because these illnesses also cause fever and aches (two potential indications for acetaminophen), it is difficult to determine a causal association.