Azithromycin and the Risk of Cardiovascular Death 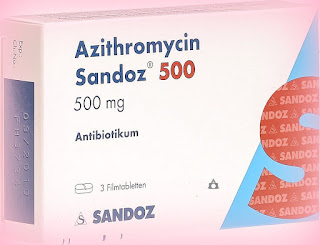 Azithromycin, a broad-spectrum macrolide antibiotic, has been reported to be relatively free of cardiotoxic effects. However, the closely related drugs erythromycin and clarithromycin can increase the risk of serious ventricular arrhythmias and are associated with an increased risk of sudden cardiac death.

Furthermore, accumulating evidence suggests that azithromycin also may have proarrhythmic effects. There are at least seven published reports of patients with normal baseline QT intervals in whom azithromycin had arrhythmia-related adverse cardiac effects, including pronounced QT-interval prolongation, torsades de pointes and polymorphic ventricular tachycardia in the absence of QT-interval prolongation.


The study cohort included persons with prescriptions for azithromycin, amoxicillin, ciprofloxacin and levofloxacin. Azithromycin users were primarily women (77.5%), had a mean age of 49 years, and had frequent use of cardiovascular or respiratory medications, visits to the emergency department and prior use of antibiotics.

The characteristics of patients receiving azithromycin prescriptions and the propensity-score matched controls were very similar. In contrast, patients who were prescribed ciprofloxacin or levofloxacin were generally more likely to have complications of diabetes, incontinence and wheelchair or walker use.

The mean summary cardiovascular risk scores for patients taking amoxicillin (9.5), ciprofloxacin (10.3), and levofloxacin (10.6) were higher than the scores for those taking azithromycin (9.3).