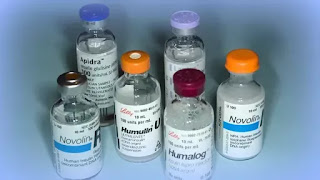 There are three main groups of insulins: Fast-acting, Intermediate-acting and Long-acting insulin.

Rapid Acting Insulin Analogs (Insulin Aspart, insulin Lyspro, Insulin Glulisine) which have an onset of action of 5 to 15 minutes, peak effect in 1 to 2 hours and duration of action that lasts 4-6 hours. With all doses, large and small, the onset of action and the time to peak effect is similar. The duration of insulin action is, however, affected by the dose – so a few units may last 4 hours or less, while 25 or 30 units may last 5 to 6 hours. As a general rule, assume that these insulins have duration of action of 4 hours.

Pre-Mixed Insulin which is NPH pre-mixed with either regular human insulin or a rapid- acting insulin analog. The insulin action profile is a combination of the short and intermediate acting insulins.